Politically Correct: Tips on How to Avoid Office Politics 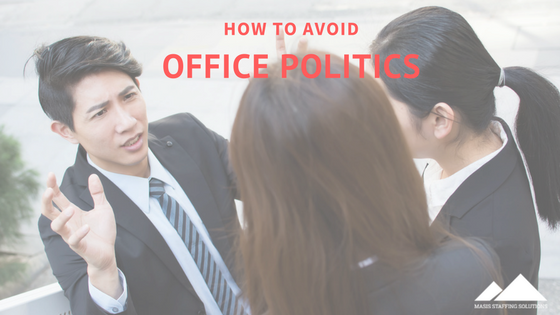 16 Mar Politically Correct: Tips on How to Avoid Office Politics

Even in the best of jobs – fulfilling work, great pay, interesting colleagues – it’s often difficult to not occasionally get pulled into the petty underbelly of work, no matter how hard you try to avoid office politics. It’s usually close to impossible to completely stay out of the way – people are people and there are always a handful (or more) who want to manipulate situations to their advantage.

Here are some ways to avoid office politics:

Quiet time. One of the most effective ways to avoid office politics is to simply say as little as possible when these situations come up. This is particularly true if you’re new. You have no idea what the history is among different people, and what the “real” version is. Did they really get passed over because their manager prefers Yankees fans? Maybe, maybe not. No need to opine at all.

Identify and isolate. It’s pretty easy to see who is really driving the politics. They’re often finding ways to turn a legitimate work conversation into an opportunity to give tangential information.

If you find that you start talking about the budget and the conversation goes sideways into how someone used their expense budget and which colleagues they take to lunch – watch out. To the degree you can, try to simply keep conversations with manipulative co-workers like that as businesslike as possible. Can you email instead of having live conversations?

Trigger words. There are always subjects that are simply more sensitive. Perhaps it’s the new boss, or who got promoted, or who has the most interesting work. Or it can be historical issues related to an incident or a person. It’s best to figure out which subjects are hot button items, where even a fairly innocent comment is subject to scrutiny.

Most important is which of those topics impact your manager and other decision makers. If you must discuss these matters, make a point of speaking to your manager privately, directly, and preferably live. If you see the conversation is being poorly received, you want to have a chance to avoid office politics by making it clear your question is not a loaded one.

You can’t avoid office politics all of the time, but you can reduce it.

As long as humans work with other humans, people will want to find ways to use relationships and insecurities to manipulate situations. But, if you’re very aware of who is doing it and which topics are sensitive, you can stay clear of tough situations at least most of the time.