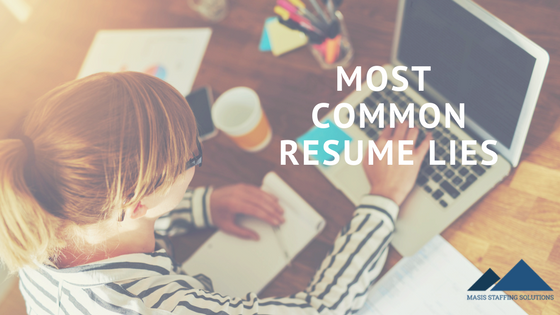 Posted at 17:29h in Job Seekers by Tanya Ponton

For anxious job seekers, resume lies are of the most common ways that some people stretch the truth.  If your conscience does not keep you from deceit, the fact that human resources professionals are on to the game should. Surveys found that these professionals have increased the amount of time they spend checking references in the last three years. Remember every lie needs another one to back it up.  Don’t do it. Seriously.

Here are some of the most common resume lies:

Dates. One of the most common résumé lies is manipulating with dates to hide employment gaps. The reasons are varied: hiding being fired, a period of job hopping, an embarrassing prison stay and other situations that you do not want to share.

Women (and now, more and more men) often stretch time lines because they fear it will be difficult to reenter the workplace after starting a family — it’s an unfortunate bias, but take it head on. If you don’t you’ve just created another problem for yourself.

Education. This is one of the easiest résumé lies to check, yet bogus college degree claims are prevalent.  Be proud they you attended a community college and received a certificate or AA degree rather than report you finished from a four year university.

Often not having a diploma is one of the things many applicants are most ashamed about. But there may be an entry level position open that could put you in line for future jobs.

Experience. Your tall tales of these can often lead to a spider web of lies. For example, a department store salesperson might claim they increased sales by 85%, or a small-office manager, might say they managed 40 people.

Be careful if you are hired on a new job with these expectations and fail miserably because you told half-truths. And if they check your references, it’s almost certain to be found out.

Salary. The mighty dollar can often lead to misrepresentation of your real worth. Some job seekers will say they were paid a higher salary at a previous job in an attempt to get more money.

Remember your bonuses are not salary. Employers are wising up. Now it is becoming more common for companies and recruiters to ask for a recent pay stub or tax return. Imagine talking your way out of that.

And everything else. include college graduates raising their grade point average or claiming honors they never won. Others often blur the line between being familiar and not proficient when it comes to technical expertise, such as knowledge of software programs.

Claims of language proficiency are also common. When you claim fluency in Spanish on your résumé be ready to perform. During an interview, when the hiring manager begins speaking to you en Español, the truth will come out.  Claiming English as your only language fluency is far better than losing the opportunity of being hired.

Don’t risk resume lies. Because it’s just not worth it.

So why do people do it? Why all the lies and fiction? Simply put, in today’s environment, where unemployment is high and people often change jobs, fear can lead to desperation. But whether you get caught in the interview, on the job or years later in your career, remember, “Whenever you tell the truth, you don’t have to remember what you said.”