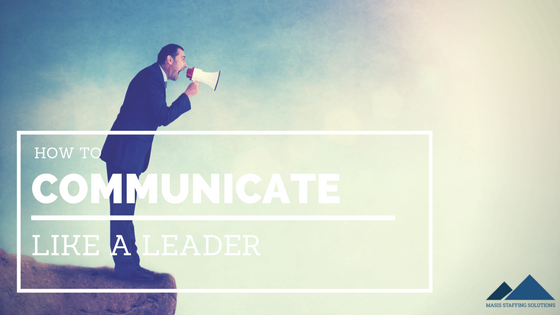 25 Jan Speak Up: How to Communicate Like A Leader

If you’re the boss, then technically you might not need to be an effective speaker. People sort of have to listen to you, right? Maybe. But if you know how to communicate like a leader, then you won’t have to rely on seniority (or, fear). You want a team that both understands what you need and enjoys hearing how you say it.

Stop talking. It might seem counterintuitive, but one of the best ways to become a better speaker, is to do less of it. It’s a natural tendency to talk too much – especially if we’re the one in charge. If we’re a decision maker, a team leader, or set the goals, we usually have more information than everyone else in the meeting.

But one of the best things you can do as a leader is to take a breath, invite questions, and really pay attention to what your team is saying. If the first time you try it, you get radio silence, push them. Make it clear you’re not just being polite.

Over time people will respond well to feeling as if their opinions matter. Not to mention you’re likely to learn something as well, whether it’s a better solution, or just the realization that others aren’t understanding you and need to know more.

Why it matters why. When you introduce a new concept to people, they can have a natural inclination to stick with the status quo. They have mastered it, and feel confident it doing it well. It doesn’t matter if it’s a timesheet system, a filing process or a sales strategy.

There’s comfort in the familiar. It can help immensely to give people context for why the change is happening. Unless it’s really sensitive information, try to be transparent.

If it will save the company money, be up front. If it’s going to yield more data or sales leads, let them know that they will benefit. But try not to introduce change in the dark.

Encourage feedback. In addition to talking less to get other opinions, more explicitly invite team members to give you feedback. Whether it’s a new project, a difficult client or different responsibilities, be aware when something changes for a team member and encourage them to vocalize their concerns. You can communicate like a leader by making it clear that you support them and want to hear their opinions – and that includes feedback on you.

It may take practice, but you can learn to communicate like a leader.

As with any new skill set, if you aren’t already doing the things recommended, you may have to learn. It could be adding a note in your meeting prep, reminding you to solicit questions.

You might need to add a monthly “ask for feedback” alert to your calendar. It will feel artificial at first, but like most things, once it becomes a habit you will start to naturally do it. Being the boss means not only challenging others to realize their potential, but to challenge yourself too.

being a better boss, communicate like a leader, improving communication skills, speaking skills