Cultural Fit – Should One Size Fit All? 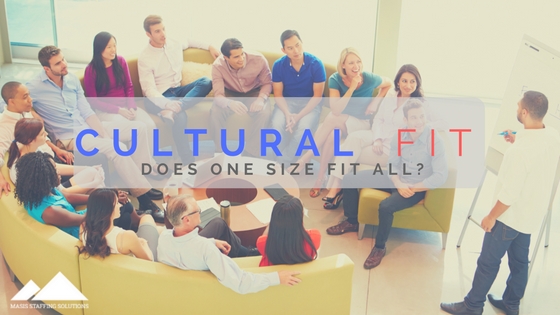 13 Sep Cultural Fit – Should One Size Fit All?

You’re sitting across the interview table from a prospective candidate. Their resume is in your hand. You have a notebook of questions to ask and a pen ready to record their responses. As you begin the conversation, you find that they are witty, well-read, and an extensive traveler, as are you.

Like your business partner, they enjoy Italian reds and domestic beer. The company softball team needs a new pitcher and they played varsity in high school. This person begins to evolve into more than your next supply manager. They just make sense. They’re the right. . . cultural fit. Hiring them is a no-brainer.

The pros and cons of hiring for cultural fit.

What does cultural fit, even mean? There has been a lot of debate and contradicting advice about whether companies should seek and value employees who are a great “fit “with the organization. Generally this means that the personality, attitudes and/or interests of the person align well with the atmosphere of the company. No big deal, right?

Well, depends. It’s true that most start-ups have distinctly different environments from long-established traditional corporations. Many of them attract people who want a less orthodox experience – whether that means being able to wear flip flops to the office, work from home, or build a product or service in a new industry.

But what if that group is heavily represented by people under a certain age? Or people that are mostly single? Or mostly vegan? Is a candidate who is married and ten years older going to be received less favorably in the interview because they don’t fit with the existing employee base?

On the one hand, it makes sense to at least ask the question. The culture of an organization like Google, for example, is well-known, and prides itself on some fairly specific values and goals.

So, when Google hires into their internal team for roles like accountants, do they hesitate to hire well-experienced people who come from traditional large accountancy firms? Does the atmosphere of, say, Ernst & Young, founded over 150 years ago, build the kind of professional that can then operate in an organization that didn’t even exist two decades ago? And what kind of person is that, exactly?

Why birds of a feather should flock together. The arguments for cultural fit are relatively straightforward – you spend a ton of time with colleagues, easily eight to ten hours or more, at least five days per week, and maybe more than that. The ability to collaborate well, be supportive of team members and think similarly seem easier when you have similar ideas about the world, share common interests, or come from the same background. You just “get” each other.

And it’s hard to argue with the theory that if you like someone, beyond just a professional appreciation, you will work harder to help them achieve their goals. You’re also even going to be more generous sharing time and credit with them. You will naturally mentor those who report to you, and more likely receive promotions and opportunities from those who manage you, if there is genuine friendship.

Plus, people are more likely to socialize together with people they are happy to spend “off campus” time with, and that likely translates into more time thinking and working to improve the business, even if casually. Cultural fit is about more than being fun to hang out with, there can be real value in building an organization that feels like everyone is looking in the same direction. In fact, there are studies that say if you don’t account for cultural fit, replacing people that don’t work out could cost you 50-60% of their annual salary.

Could the emperor have no clothes? All good. So what could possibly be the downside? Well, the least difficult answer is too much of a good thing is … you know.

Are you able to stay objective when doing performance evaluations of your new buddy? Will you become defensive or biased when hearing others give critical feedback of them? Will they take advantage of your friendship, expecting you to overlook tardiness or poor work product?

And what about the reverse problem? Will you get real, helpful feedback from people who don’t want to hurt their friend’s feelings, as opposed to productive criticism from less biased colleagues? Do you really want a bunch of “yes men” who won’t or can’t see a different perspective, because they are just too much like you?

[bctt tweet=”Build a sales force based on variety of experiences instead of cultural fit, and you might succeed across more markets or customers.” username=””]

And at the most problematic end of this – lack of diversity to the point of discrimination, even if unintentional. It’s easy to relate to someone who looks like you, sounds like you, is the same age, whatever.

But it also means you risk overlooking people who have great value because they don’t seem much like you. It can be difficult to work against your instinct to hire someone that you just like. Although some proponents of cultural fit ask questions like “Could you stand to be stuck next to this person on an airplane for 11 hours?”, you have to ask – is that really a likely reality.

Ultimately, organizations have to decide for themselves how much cultural fit should matter in their hiring process. Any responsible company will be sensitive to racial and gender-based discrimination.

But beyond that, they have to be aware of how important it really is to hire the kind of person who seems like a good personality match. Someone with a more outsider perspective is a useful opportunity for the team to stretch beyond their comfort zone.

And remember, that person who seems so completely different from you, could still become a great colleague   … and the coolest friend ever. Who says you can’t have both?