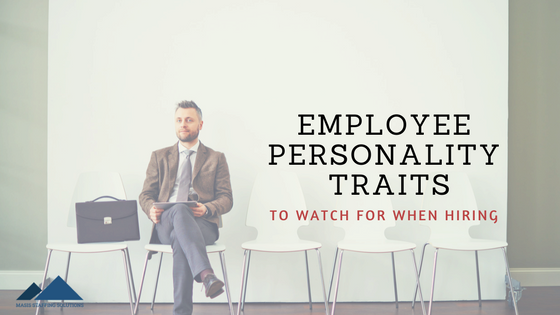 If you’re in the middle of a recruiting search, then you hopefully have already a concrete job description, a good idea of a competitive salary, and an ideal start date. But what about the right candidate? It’s more than just academic or professional experience – they need to have the right employee personality traits. If not, you could get more than you bargained for . . . and not in a good way.

If you are hiring, beware of these difficult employee personality traits:

Nix the negativity. Anyone who comes to an interview is most likely showing you their very best side. After all, they’ve had time to learn about the company, the position, and rehearse why they want the job.

Most people can keep it together for the length of one interview. That’s why it’s incredibly important if you pick up on negativity this early. Imagine them after the commute has settled in, they aren’t the super polite new guy, they’re fighting a cold, whatever.

Negativity is contagious, because it easily sucks the energy out of people who are good-natured. At the very least, it can be distracting and time consuming to interact with someone who has to get in their list of complaints before every encounter.

Blowhard, hardly worth it. You want someone confident in a new role. Confidence can be great for leadership roles, sales positions, customer service needs and other people person jobs. But what you don’t want is someone whose confidence is really just bragging – all about what they’ve done and what they can do.

People like this tend to have a related set of employee personality traits that are difficult to manage – they don’t listen, they’re arrogant, they can be resistant to change. So if you find in the interview someone is a little too confident, ask them questions like what they want to improve about themselves. See if they take the cue and dial it down.

Unbothered? Uncool. There are some definite upsides to having Type B personalities in an office environment. Maybe your biggest go-getters on the sales team are intense and hyper-organized, and that’s great. But it can be a good balance to have some people who are a little more relaxed to balance out the atmosphere, especially during high stress times like budget season or if the company is underperforming.

But what you don’t want is someone who simply doesn’t care. Employee personality traits that indicate lack of interest, translate to lack of effort. Not to mention lack of loyalty, if they’re not emotionally invested, you could be left in the lurch for the next thing that comes along.

Not all challenging employee personality traits mean no hire.

After all, you’re assessing this in an interview. First, push on anything that makes you hesitate. Keep asking more questions to test if they really are as apathetic or arrogant as they seem. Behavioral interview questions are great for this. Or hint at your concern – say things like “we’re really a team-oriented company, and we believe that everyone has room to learn”.

People are nervous in interviews and sometimes they say things in ways they don’t mean to. But if they have the emotional intelligence to realize they’ve gone astray, it’s a great sign that either the worrying employee personal traits aren’t there, or probably manageable. If you like a candidate, don’t despair. It’s not about giving up, just getting ready.