What to be When You Grow Up: Five Highly Satisfying Careers 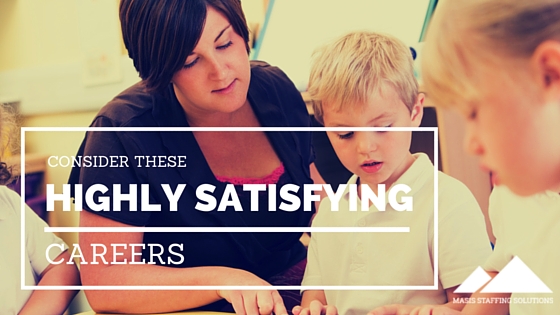 17 Feb What to be When You Grow Up: Five Highly Satisfying Careers

If you’re headed to college, already there, or thinking about going back, you’ve probably been considering what to major in. While there are some obvious decisions to make about what you find interesting and what you have a natural strength in, there’s also the reality of how much money you’re likely to make.

But before you run to the cash, consider also what is most fulfilling. There are multiple studies that the highest-paying professions are not always the ones that bring the greatest happiness. On the other hand, those with satisfying work responsibilities tend to be less stressed, feel more productive and experience less burnout. 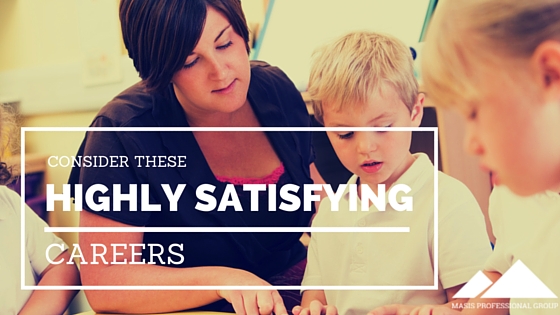 Teacher. Working with young minds can be stressful, and parents and principals are two more “clients” that have to be satisfied. But people in education tend to find their work rewarding, that they are having a positive influence, and can make a difference in someone’s life. Most teachers major in education and specialize in either a subject, like math or history, or a certain area of education such as early childhood or special education.

Nurse. Most medical professionals feel they are making important contributions and thus are in highly satisfying careers. A recent study found neurosurgeons the most satisfying high-paying job, but even if you aren’t ready to commit to eight years of school and other 8-12 of internship and residency, roles throughout the health care work tend to lead to a sense of real contribution.

There are a variety of levels of nursing and specialists, all of which require different levels of education and training. But if you like science and you like to help people, this could be a career worth considering.

Counselor. Those who help people with mental illness challenges, the grieving process, education planning or addiction might seem like a wide variety of roles.

[bctt tweet=”Not surprisingly, those who help others by talking out issues and providing comfort, often find that role satisfying.”]

For some, being a counselor is performed in a faith-based setting such as a pastoral counselor. For others, it can be in an educational environment. Training can be a Master’s degree in social work or it can mean getting a Ph.D. in psychology.

But counselors often top lists of highly satisfying careers. If you like to listen to people and think you are capable of helping people overcome personal obstacles, this might be the right job for you.

Systems developer. Some may be surprised to see technology on this list. The excitement and cool factor of computers has faded into a daily reality, and it might seem like no one calls the IT guy unless there’s a problem, but many people in technology are really satisfied with their jobs.

Systems developers in particular generally produce and install hardware systems in the workplace. And they feel good about doing it. They probably also know the coolest apps.

Loan officer. The economy is steadily making a comeback, so helping people get access to money isn’t as stressful as it was a few years ago when banks were more nervous about debt. The reality is, people borrow money to realize dreams – college, a home, to start a business.

Being a loan officer can mean being the bearer of good news – a telltale sign of a highly satisfying career. You’ll need to like money, of course.

These are just a handful of highly satisfying careers.

The truth is that in any given year you can find a different list of what occupations are making people happy. Some are more creative roles like writers or chefs, some are incredibly intense roles like firefighters.

But what most of them have in common is that the people who do them feel they are making a positive impact on others, or even the world at large. It’s easy to look up average salaries and figure out what can make you a lot of money. But the right investment in yourself likely requires some soul-searching on the payoff beyond the paycheck.