Speak up: How to Give a Good Performance Review 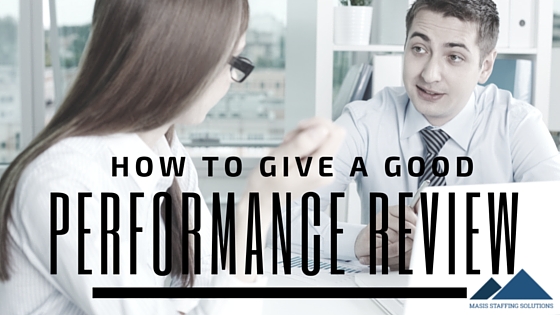 25 Nov Speak up: How to Give a Good Performance Review

Direct reports dread it even more.

The idea of offering feedback to your team comes from a good place, a great place actually. In a perfect world, you would have a comfortable conversation about how the past year had gone, what your direct report feels they accomplished and where they would like to improve.

You would have a concise but thorough document outlining their important projects, where they had demonstrated leadership and how they could plan for the coming year.

If only it were that easy.

But here are some tips on how to give a good performance review:

Be specific. The problem with general feedback such as “everything is going great” or “nice job this year” is that at best it doesn’t articulate what exactly was so impressive. At worse, it sounds like you didn’t make any effort to thoughtfully assess their performance.

If six months from now they ask for a promotion, you really have no basis to say yes or no. Give examples of presentations they gave, client relationships they handled, or projects they completed. That said, avoid rankings whether numerical or letter grades, as they tend to be artificial and hard to defend. In fact six percent of Fortune 500 companies have done away with rankings in recent years.

Review the entire year. What is referred to as the “recency effect” – is the tendency to remember the most recent events at the expense of not recalling earlier in the year. This means that you are likely to weight too heavily their performance since August, and not pay enough attention to what they did last spring.

This can obviously work for or against them, depending on how their year went, but either way, it doesn’t give a holistic view of the prior twelve months.

No surprises. Giving feedback should be a year round activity – even five minutes of informal chat about how a presentation went, or a complimentary email after a project is finalized.

But annual reviews should not be the first time an employee is hearing about something that did not go well, and ideally, they should also know when they have been especially impressive. If your team member is taken off guard in the review, that is a sign you are not communicating enough throughout the year.

Avoid talking money. Raises are always a sensitive subject but the wrong time to discuss them is during a feedback session. Have a conversation about what is going well, what isn’t, and what they need to do to get to the next step in their career.

This will better set up a subsequent, separate, dialogue about a salary increase. Then, if you have to deny it, or offer less than they hope for, you have already laid out logic for your decision.

[bctt tweet=”Encourage your employees to also give you their opinion on what you are doing well, especially regarding your management of the team.”]

Be sure not to get defensive or disagree. Listen to their concerns, take notes, and engage in the conversation.

You can give a good performance review if you prepare.

As obvious as it seems, people always value a sincere compliment, or even helpful tips for how to improve. So if you give this feedback throughout the year, it will take pressure off of the year-end review.

When it is time for the annual assessment, come prepared, have specific examples, and ask what you could be doing to help your team do better. With time, their feedback of you will be as valuable as yours to them.