Keeping it in the Family: What to Consider When Hiring Relatives 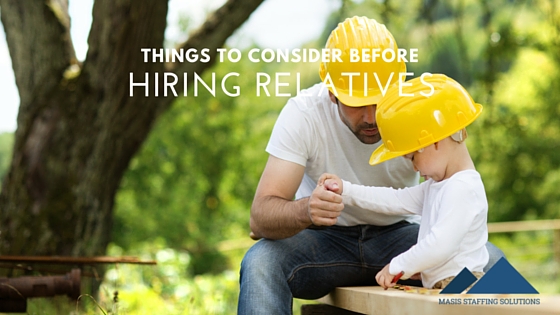 06 Jan Keeping it in the Family: What to Consider When Hiring Relatives

You’re the boss. You get to make all the decisions.

Or at least that’s what your Aunt Edna told you at Thanksgiving. Just before she reminded you that your cousin Teddy, who just graduated last May, is a great guy and a hard worker. At least he would be, if he just had a job.

Here are some things to consider when hiring relatives.

What’s the worst thing that can go wrong? That might sound like the opening line to a sitcom, but seriously, consider the implications of working with family. It’s not meant to be cynical, but like any business decision, think about the long view before you make it. If the working relationship didn’t work out, how much would it damage your personal relationship?

This depends on a variety of things, of course: how strong the relationship was before the hire, how important or influential the role was in the business (if they mess up and they’re only the intern, that’s pretty different than if they are running a division), who else was in the running for the job. And that brings us to the next point. . .

What is the hiring process going to be? If you do choose to hire someone who shares your last name (or your spouse’s), are you going to just hand them the job, or make them apply and interview like other candidates?

Even if you acknowledge that they will have your support, you don’t have to hire them outright. If they are going to report to someone other than you, it’s important to get their new manager’s buy-in.

Be honest about your personal relationship, that you would like to give them an opportunity, but also recognize that their immediate boss has a right to participate in the decision. If you are the one who is ultimately in control, then you can overrule, but be careful when forcing a new team member on someone.

Hire the relative, not the whole family branch. Even if you give Cousin Teddy a shot, make it clear that Aunt Edna’s role ends at putting in the good word. Establish early in the working relationship that you won’t answer to every aunt and uncle about how things are going, and don’t discuss salary or performance with anyone but the employee. (Just like you would with anyone else who works for you.)

Hiring relatives doesn’t mean your professional and personal relationship lines have to blur. And most people who get in a foot in the door because of their last name usually don’t want that kind of messiness in their lives, either.

Get out of their way. Sometimes the tough thing about hiring someone you’re related to is not the concern for things to go poorly, but over-enthusiasm is trying to make sure that all things go right. You’re giving someone a chance; now let them be their own advocate.

Allow them to develop independent relationships, encourage them to find a mentor (other than you), avoid making a bee line for them at every event or meeting. No one expects you to have a completely unbiased view toward your relative’s performance on the job, in fact, they’ll likely be very aware of it. So don’t complicate matters by continuing to highlight the personal connection you have.

Keep your standards, standard. It’s hard to watch your own son or daughter (or even good Cousin Teddy) and not see something of yourself in them. That means you’re likely to overlook a misstep . . . or overreact. Push yourself to expect no more or less of them than a stranger who works for you.

You’ll create tension if others see you letting things slide, or punishing every mistake. So when you react to their work decisions, check yourself and make sure your response is as close as possible to what it would be if you hadn’t watched them at Little League.

Hiring relatives can be a great investment in people you care about or a recipe for disaster.

More than two-thirds of the world’s businesses are family businesses, so there’s no question that hiring relatives is a manageable challenge.

[bctt tweet=”There’s no one size fit all answer to the question of whether you should hire a relative.”]

Some of the most successful organizations in the world are family-run businesses, and probably pride themselves on the shared values and priorities that come with hiring from the ancestral tree.

Other business leaders may think that the key to a healthy home life is not bringing work to the dinner table. That’s a decision every boss has to make for themselves. But if hiring relatives is part of your strategy, be sure to have a plan and a process for making heirs into employees.