Should You Stay or Should You Go? Moving for a Job 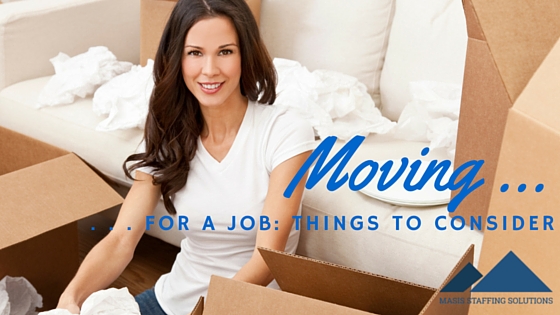 It wasn’t uncommon thirty or even twenty years ago for young people to find a job with a company, and then spend the better part of their career continuing to scale up the ranks of management, and eventually retire from their first employer ever. While some of those career paths might have led to positions in a variety of cities, it was just as likely that they would stay in the same town for their whole career, especially if they worked at the corporate headquarters or a major office. People might never move for a job.

Fast forward to the last ten years, and recent statistics state that it’s normal to have ten different jobs before the age of 40. Given all those different opportunities and experiences it’s a lot more typical to find yourself not just switching letterhead, but switching zip codes. But that’s not necessarily an easy decision.

How to do you decide if you should be moving for a job?

Familiar faces or new horizons? First of all, are you moving for a job with your current employer or about to start a new job with a new company? The difference is the questions to ask. For example, if you are staying with your current company, you can find out the chances for being able to return to your current location if the new city doesn’t work out. And you can also ask colleagues to make introductions to new faces in other offices. You might even be able to ask your employer to help set you up with a mentor or office buddy while you settle in.

[bctt tweet=” Even if the new gig is exciting, better paying, a dream job – expect some stress and anxiety as the new kid on the block.”]

Add to that the separation from your old neighborhood, friends, and routine, and relocation could be a much bigger deal.

Money matters. If you are moving to a similar position in another town, you should of course consider the financial implications of being in a new place. If the salary is the exact same number on paper, you need to thoroughly research the cost of living in your new destination. Be sure to use a cost of living calculator to help you do the math. Rent is a lot higher in New York City than it is in San Diego, and San Diego is more expensive than Waco.  So make sure that the numbers translate before you transplant.

Know thyself. Why are you really considering moving for a job? If the job is just a front for a chance to escape an old relationship, nearby parents or general boredom, that isn’t exactly wrong, but it might not be wise. Be sure that if you move it makes sense for all aspects of your life – social satisfaction, personal growth, professional development – and be honest with what you want this move to do for you. If you throw yourself into a new job and location in order to escape memories of an old girlfriend, you are putting a lot of pressure on yourself that might be more than a change of scenery can solve.

Who’s coming? If you have a spouse and/or children, it goes without saying that you need to be confident the relocation is in everyone’s best interest. Even if the new job pays more, uprooting the lives of your loved ones will almost certainly cause some initial strain. Be sure that everyone understands why moving for a job is the best choice for the family. Not every teenager is going to love being pulled away from their friends and school, but giving them an opportunity to feel heard and being sensitive to the challenges they will face could make the transition smoother.

Should you be on the move?

In a recent census study, 12% of people in the United States moved in a given twelve-month period. In general we are considered a much more mobile nation than we were in previous generations. But just because we do it, doesn’t mean we should. So take a hard look before you move for a job at exactly why you’re doing it and what you hope to get from it. Get advice from people you trust. Visit the potential new place. Identify and weigh what you love about your current place and what it would mean to give it up. These steps can help ensure the only baggage you bring to the new place is in your hands — not your head.