New Boss, New Rules? How to Cope With a New Manager 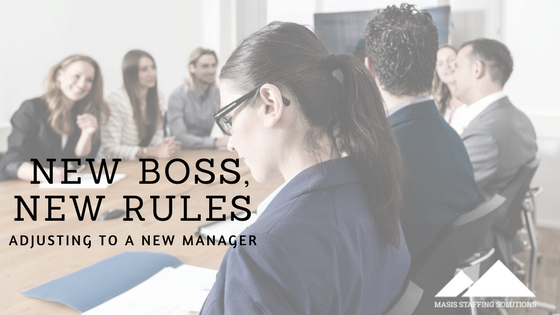 26 Apr New Boss, New Rules? How to Cope With a New Manager

It’s one thing to decide to get a new job and understand that a new job means you have to get used to new rules and new expectations. But it’s quite another when you’re in the same job, at the same company doing the same thing. And then you get a new boss. Maybe it’s someone from a different part of the company. Or maybe it’s a total outsider. But suddenly you are the one who might have to change.

How you might need to change if you get a new boss:

It’s easy to assume that you can stay the same, even if your boss is new. After all, if you’ve been doing your job well, and the company goals are the same, why do you have to change? Because, well, you just do. Or maybe you don’t, but you need to find out what your new boss values, and then decide.

Style differences. One thing can just be a different management style. Does the new boss prefer weekly updates over email? Is she going to implement a weekly team meeting and ask everyone to give a verbal update? Regardless of your own preferences, you’ll have to adjust to new expectations and meet them.

Help them get comfortable. You don’t want to be known as the person who just sucks up all the time, but there’s nothing wrong with reaching out and being helpful. This is especially true of someone who is new to the company. You don’t need to become their new best friend, but you can certainly make a casual but genuine offer to help them figure out the database, or billing system, or expense report template.

Be patient. One of the simplest things can be the most difficult. Even if they’re your boss, they’re also the new kid on the block. They will make mistakes, or take longer than your old boss, or try new tactics that don’t work.

Try to remember that they have a new boss and a new team reporting to them. And they’re trying to make a good first impression. At times this can mean they’re overeager or overambitious.

Prove yourself. This one is difficult – why do you have to prove yourself when you’re not the new hire? Because you need to build trust and confidence with your new boss. Your old boss knew you and believed in you.

That might have meant that it didn’t matter if you were always a few minutes late or had the occasional typo in an email. But with a new boss, the truth is, you’re back at square one. You’ll have to prove yourself. It’s not fun, but it is the reality.

A new boss is also a new opportunity.

But don’t overlook the upsides of a new boss. You get a chance to start over without any baggage of the past. Any old grudges are gone, or the lingering doubt after a mistake you made three years ago, or the raise you asked for and didn’t get. So see this as a fresh start for both of you.