Out in the Open: Challenges of Open Plan Offices 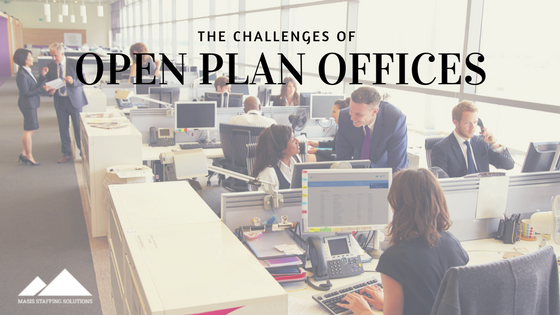 06 Sep Out in the Open: Challenges of Open Plan Offices

It may seem like a distant memory, but it wasn’t that long ago when the idea of people working in open plan offices was unheard of. Everyone out in one large space, all at long tables with dividing walls wasn’t a thing. People had offices. Four walls, with a door, and did work in their own enclosed physical space.

The problem behind closed doors. One challenge for employers, though, was you don’t know what you can’t see. If you were on the phone with a friend, or surfing the Internet, or …doing absolutely nothing, there was no way to know. Also, one person per office takes up a lot of space.

The solution of open plan. For these and many other reasons, it became a popular idea to move to the open office concept. One, it’s hard to catch up on gossip when there are colleagues just a few feet away. Two, you don’t need as much square footage to run the company, as each person’s individual work area is far smaller than individual offices. Three, there is something very democratic about recognizing everyone as an equal contributor, even if some have more experience and responsibilities.

Reality bites. So, it’s such a shame that all these laudable reasons are now being pretty consistently proven as not bringing the expected outcomes. There are studies that show productivity is lower, for example. While people are no longer wasting time behind closed doors, they’re often distracted by others nearby, that productivity has slowed even further.

Plus, there are new problems that have come with open offices, including a rise in contagious conditions like the common cold. For obvious reasons – people are very near each other and the close contact makes the spread of germs much more likely.