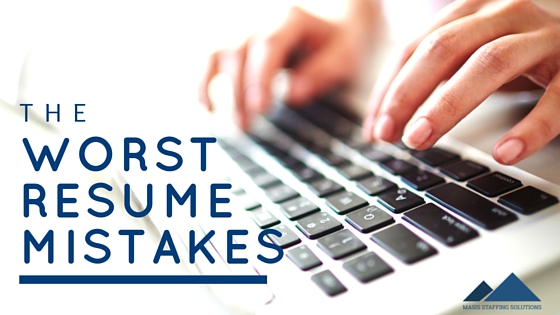 We get it. You’re trying to find a new job, you’re on LinkedIn, you’re tapping your networks, and you’re rewriting your resumes. Lots of balls in the air, and you’re only one person. But if getting hired is a priority, we want to point you away from some of the worst resume mistakes that could keep you out of the running.

Here are some of the worst resume mistakes to watch out for:

Typos, spelling errors, grammatical mistakes. Ok, English can be tricky. Using the wrong “their/they’re/there” or “your/you’re” could happen to anyone; after all, spell check doesn’t can’t catch those distinctions.

[bctt tweet=”And if you can’t be bothered to proof your resume (or have others look at it), then how can you be entrusted with details on the job?”]

Fibbing/stretching/creating “facts”. Look, it’s the age of the Internet. Social media is an employer’s best friend. Not to mention, you know, actual background checks. Before you add a Harvard degree or a job you never had or a language you don’t speak to your resume, just think about it.

Hiring managers are at different times amused and horrified at the things people will put on a resume because they think they can get away with it. It’s one of the worst resume mistakes that people make, and it never turns out well.

You read it here first: you can’t get away with it. It’s this simple – if you get caught lying before you even get the job, then . . .yeah. Moving on.

References that don’t rock. This one really hurts, because it happens so late in the game. If you don’t know your references well, if they don’t love you, if you can’t say with certainty what they’ll say when you’re not in the room. . .aren’t references, they’re people you know.

Which is a shame, because usually by the time a potential employer is checking your references, they are seriously considering you. So imagine their surprise/dismay/annoyance/panic when your references are cagey. Or say flat out uncomplimentary things. Or don’t remember who you are.

Creative craziness. You want to be a standout candidate. You want to be memorable. But for the right reasons. Do not use scented paper. Do not submit resumes that open with a sonnet, or your favorite Rolling Stones lyrics.

Do not send resumes that are eight pages long, or written in fonts other than Times New Roman, Arial, or a handful of other very traditional, very legible typefaces. Do not send in anything in any color other than ivory or white (paper) and black (ink).

It’s not cute, entertaining, funny, punny, or inventive. It’s one of the worst resume mistakes because it’s annoying. And annoying people don’t get hired.

The worst resume mistakes are the fastest way to end up out of the running.

The thing is, most of these resume mistakes – no, all of them – are easy to avoid. Be diligent when you use those pesky English words that sound alike but aren’t the same. Don’t put it on paper unless it’s true. And when you do put it on paper, keep it simple, in black and white, literally. If you want to be creative in how you represent yourself, start scrapbooking.