Interview Emergency: What to Do After a Terrible Interview 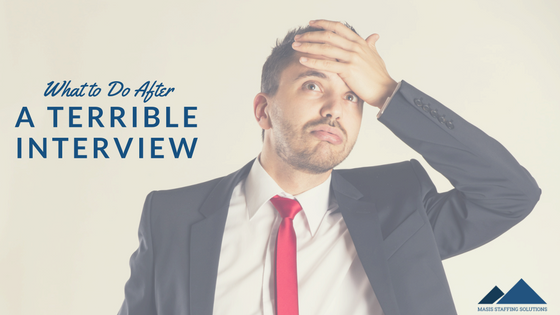 30 Aug Interview Emergency: What to Do After a Terrible Interview

It can be so exciting to get a chance to interview for a new job. Whether it’s because you haven’t had luck finding something, or it’s the company of your dreams, or the beginning of your career, nothing is more devastating than a terrible interview experience. But the reality is that it’s more common than you might think. And it doesn’t have to be the end of the conversation.

What to do after a terrible interview:

Step back and review. Ok, maybe you blew it. You just feel it in your gut. Awkward pauses, or you quoted the wrong fact, even called the interviewer by the wrong name. Think about which moments felt like critical mistakes. Jot down briefly the things on your mind to get it out of your head and on paper.

Then chill. Seriously, walk away. Consider maybe you didn’t really have a terrible interview. The more you want the job, the more likely you are to beat yourself up for every miss.

Don’t immediately call or email to explain yourself. Take a breath. If it wasn’t a big deal, they’ve forgotten. If it was really a disaster, well, maybe put a little time between you and that moment.

But did you then go on to make it clear that you knew what you were talking about, why you wanted the position? Look, if you called it Yahoo while interviewing at Google? Not cool. But if you called Danny the interviewer Davy, then just be sure to send a quick thank you note using their correct name. Do not point out the error.

Cut your losses. If you made a mistake you can’t come back from – you were tongue tied or argumentative, or you suddenly found yourself on the wrong side of a political conversation, whatever – you might have to just let it go. Send a nice note saying it was great to have the opportunity, maybe make a slight reference – “I know we ended up in a lively discussion, but really enjoyed learning more about the role.”

A terrible interview sometimes is a great instinct gone wrong.

If you were just unprepared and found yourself unable to articulate with clear conviction why you wanted the job, then ask yourself – did you? You might have – ungracefully – been trying to spare yourself. That’s not something to pat yourself on the back for – but it’s not unusual for us to feel guilty about passing up any job opportunity. Or, our parents or partner or friends are excited about the job. If that’s the case, forgive yourself for the terrible interview, not because it wasn’t bad, but because the terrible interview might have helped you sidestep a terrible job.