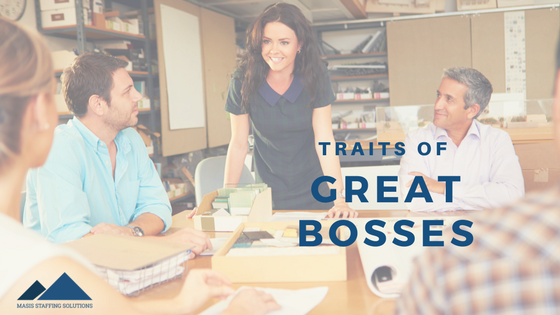 You’re only as good as the people who work for you. A bad boss is any employee’s worst nightmare. Whether they work at a Fortune 500 company or the local hardware store, employees want to work for someone who knows how to motivate people and encourage them to become even better. There is a clear difference between simply being a boss and being a leader. Maintaining traits of great bosses get and keep great employees. Bosses explain; leaders inspire; bosses criticize; leaders mentor, bosses are superficial; leaders are genuine. Traits of great bosses directly lessen the chances of losing valuable employees.

Traits of great bosses to strive for:

Go ahead, lose control. A boss that is controlling, who focuses on assigning busy work, who won’t explain to employees what role they play, all of that is demoralizing. A strong leader doesn’t always think they’re right, they can listen to others’ opinions.

They not only disregard a better idea, they embrace it (but don’t take credit for it). Micromanaging is probably the worst thing that a boss can do to an employee. A boss that is constantly looking over someone’s shoulder often causes lack of motivation to complete work with a feeling of pride and accomplishment. . .or even at all.

Change it up. A boss who generally does not like to change certain processes, even if may be more productive for the company, is engaging in dangerous resistance to change. Many employees don’t like doing anything that will require them to change; however, for managers to resist change is putting jobs on the line on the long term.

“If it isn’t broken, don’t fix it” is an outdated saying for this age of technology. Constant change and evolution are critical traits of great bosses. Growing a business requires that you constantly reinvent the office environment, the corporate culture, and definitions of success. Come up with new concepts that will allow employees to work better and more productively.

Fearless leader . . . seriously. There is still a tactic of leading by fear. This kind of intimidation is not only outdated and backwards, it simply doesn’t work in a modern economy where people are not “careerists”. At the very least it make employees feel uncomfortable if they are suppose to regard their boss as some sort of ruler they cannot question.

And given changes in employee rights’ it’s not only counterproductive, it can be illegal. We’ve all seen those old movies where the managers threaten an employee by saying they’re going to fire them if they don’t complete a big task. Sorry, that kind of management doesn’t work anymore. And, really, why would you want it to?

Visible visionary. Be someone who inspires your team to look beyond short term fixes.Whether it’s relating to a product, service, work place environment, or even conflicts, employees want to work for someone with a plan. A boss who can’t take the time to have a roadmap of what to do for the coming weeks, months, and years leads to low morale and low productivity among employees and others. Employees look to the boss to have a vision of the future.

Great managers make better decisions by studying the research, gathering data and using expert advice to back up their reasoning. They are respectful, encouraging, even-tempered and innovative. Remember, bosses boss and leaders lead. Which do you want to be?

being a better boss, being a good manager, leading a team, traits of great bosses