Workplace Makeover: Should You Update the Office Space 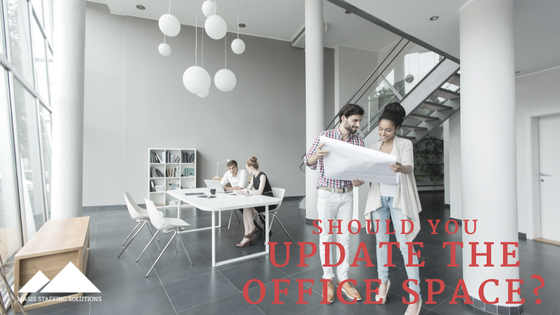 05 Oct Workplace Makeover: Should You Update the Office Space

Even though there has been an enormous uptick in remote arrangements, home offices and other flexible work plans, most people still spend a lot of their 9 to 5 in a setting planned by someone else. The good news is, companies can update the office space in ways that can truly impact employee satisfaction and productivity, and it doesn’t have to break the bank.

Ways to update the office space.

Stop blaming the cubicle. Want to know where the sometimes-loathed cubicle design originated? It actually was a 1960s design called Action Office II (Action Office I didn’t take off as planned). While the basic concept was designed as we know it – click walls into different formats to give different users individual spaces, but reducing the need for traditional walls – it’s so been deprived of its original intent.

Action Office was meant to encourage greater customization of office layouts to accommodate different businesses. Because it was so highly configurable, companies could change as they grew and evolved.

But what really happened? Companies found a way to build a desk for every person, but few traditional offices with doors and real walls. And windows – remember windows? So now the cubicle curse often involves people having very small personal spaces, yet with very little privacy. Awesome.

If your office relies on the modern definition of cubicles, that’s ok. But now that you understand know, consider accommodating some of the shortcomings with paying special attention to the rest of your structure.

And even if you don’t have cubicles, to nix the open plan concept or revisit the built in offices is a big overhaul. But you can update the office space on a smaller scale and still have a big impact.

Office ergonomics. There are tons of articles about employee health, especially posture and lumbar support for those in desk jobs. It’s incredibly important to invest in your employees’ health and comfort by considering an upgrade if your chairs are not good for back health. And forget the long term benefits – just the discomfort of being in a poor desk chair either leads to stress and pain, or encourages the employee to get up from their desk more.

Color me happy, but not too bold. Office color schemes are not the focus at the weekly departmental, but they can be affecting you in less obvious ways. Reports say that subtle, more neutral colors are generally better for the workplace.

Think grays, beiges and gentle whites (but not stark “hospital white” which can be intimidating) for the walls. You can certainly accent with pops of colors with wall art or a bright office kitchen, but provide a soothing space for where creativity and focus is needed.

Create breakout spaces. If you can manage a little space, create room for areas to collaborate. Not just official meeting rooms, but café tables in corners or a long bar with charging stations where colleagues can informally gather to talk. Meeting rooms are for meetings, but if people want to speak in groups of two or three and they have to hover around one person’s desk, it discourages free and spontaneous shared thinking.

Update the office space to communicate that you are invested in your employees.

The office space is just, well, stuff. But you shouldn’t use that attitude when you’re picking out that stuff for the office. It’s about the impact it has on the people who use them, and they’ll notice if everything provided is the cheapest or easiest. But if you take the time to think about their comfort, their work styles and even their visual surroundings, you have invested in far more than a stapler.