Breaking Up Isn’t Hard To Do: Why Your Employees Are Leaving 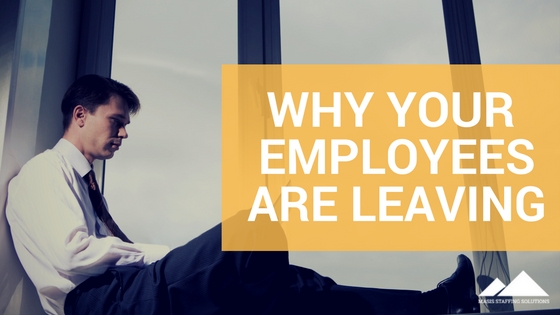 03 Aug Breaking Up Isn’t Hard To Do: Why Your Employees Are Leaving

As the economy continues to recover from the dark days of the recession, there is still a lot of discussion about how to hire the best people, the trends among Millennials and unemployment and job search advice. But that doesn’t mean that people don’t have choices. So what do you do if employees are leaving? You need to take a hard look at your company and the dynamics that could be accidentally driving away your talent.

Consider the following if employees are leaving your company:

Respect their time. People leave for more money, for a new location, to go back to school, to start a family . . . and only some of those factors are within your control. But one of the most valued reasons people go to jobs is very much something you can do – respect them.

In particular, respect people’s time. Even if you’re the boss, don’t make them wait ages for you when you have a meeting or a call. Make an effort to respond to their voicemails and emails in a timely fashion.

Employees are unlikely to say anything to you when you make mistakes like this, but they are very likely making a mental note. It’s disrespectful, people are busy, and it’s quite possible that you are incidentally keeping them from doing their jobs as well as they could when they have to time manage around you.

Hear them. Becoming an active listener is an important part of being a manager, a mentor and a great colleague.

[bctt tweet=”People want to be listened to, not just by their partners or their parents, but by the people they work with.” username=””]

Not only should you lead by example (with this and all things!) but encourage everyone at your company to support good ideas, investigate grievances and communicate openly. All of that requires people not being defensive, asking questions when they are unclear, and listening – not just waiting for their chance to speak.

If employees are leaving your company because they feel unheard, you might have not caught the hints. Listen for signs that people feel their ideas aren’t valued, that they aren’t getting feedback, or don’t understand their role in the company – these may be clues to a larger challenge of simply not feeling like they are being heard.

Remember they have lives. Yes, really. It’s easy to forget – especially if you are the founder or owner of a small company – that not everyone is invested at the same level as you. That doesn’t mean your employees don’t love their job, that they are not equally excited about the mission, or that they are not fully committed.

It means they have like, lives, and stuff. (And you should get one, too._ Keep after hour (and before hour) calls, emails, meetings to true emergencies. If your in the business of treating head wounds, by all means call your team night and day. If not, then. . .well, you’re not.

Technology is our friend, but it also is the friend who bugs us at 1 a.m., during the kids’ bath time, during Sunday brunch, and generally is overly present in our lives. Employees who don’t have to feel secretive or ashamed of having outside interests, are likely to be more committed during the hours they actually are supposed to be present.

Understand why your employees are leaving and see if you are part of the reason.

People move on, and that’s not necessarily a bad thing. Once someone has gone as far as they can in a role, or have lost interest in the mission of the business, or wants to return to school, it’s entirely natural for them to find the next opportunity. But if you feel that you are constantly replacing great talent, you might want to take a hard look at the culture of your business and your own behavior to make sure that you aren’t accidentally pointing them toward the exit sign.