Not Your Mother’s Temp Job: Work for a Staffing Agency 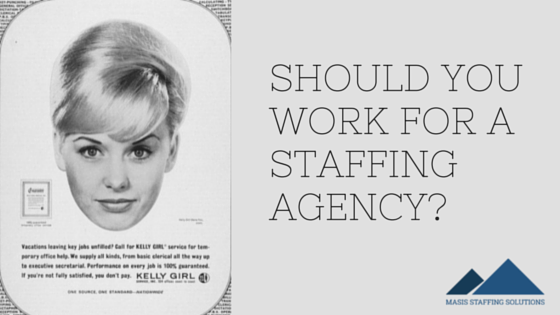 03 Jun Not Your Mother’s Temp Job: Work for a Staffing Agency

Posted at 18:58h in Job Seekers by Tanya Ponton

Temporary job agencies, or staffing agencies, have gotten mixed to poor reviews historically. While opportunities like Kelly Girls were ok for young single women in the 1960s, these days they are sometimes considered a choice of last resort.

But they shouldn’t be. Temporary jobs have evolved tremendously over the last few years, especially since the recession has redefined the way companies staff their roles. As much as 42% of companies plan to use interim workers this year to help support their personnel needs. So what’s the upside of joining the more than 14 million temporary workers hired in the U.S. this year?

5 Reasons to Work for a Staffing Agency

Before you turn your back on the idea of a temp job, find out what’s out there and what you’re qualified for. You might be pleasantly surprised to discover that you actually enjoy seeing new companies and choosing if and when you want to take the next gig.

Unemployment can feel like you’ve lost control. Temporary employment could put you back in the driver’s seat.