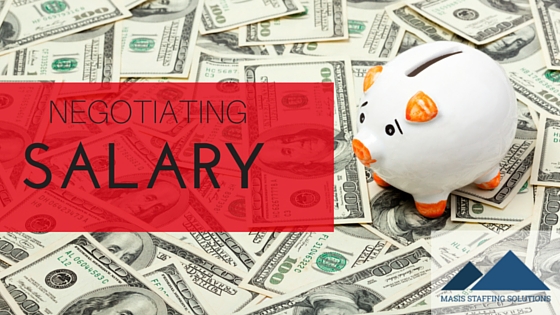 Whether you are in final discussions with an employer about a new job, or decades into your current position, it’s important to make sure that you are getting paid what you’re worth. These conversations about negotiating salary are rarely easy, but at least you can make sure they are effective and professional.

Here are 5 tips for negotiating salary:

Know what you’re worth. Websites like payscale.com and glassdoor.com are great resources to find out what is the average salary for people in similar roles. If possible, analyze the results for people at your level of seniority, in your geography, and at a similar company.

You don’t want to just know what someone in finance makes – you want to know what a C.P.A. with 5 years experience at an advertising firm in Chicago makes.

Timing is everything. Two common mistakes for when to discuss salary – too early in the interview process if you are job hunting, and during a performance review in a current job. If you are interviewing, hopefully you have some sense of what the salary range is for the role.

If you working through a headhunter, they should be able to find this out for you before even the first interview. And some job applications will specifically ask what kind of compensation you seek.

But if that doesn’t work, then you need to wait until you have an offer. There’s something presumptuous about saying “here’s how much money you should pay me” when you haven’t even been offered a role.

And if you are in a job, it might seem like an annual performance review is the right time for negotiating salary. After all, if you get a great review, isn’t this the time to ask for your salary to reflect it?

Nope. Make it clear that you appreciate good feedback because you want to be a star performer, not just to leverage it for more money. And if you get any critical comments, you definitely don’t want it to look like you’re not absorbing the information.

What you can say during a (good) performance review – that you’re delighted to hear what a fine job you’re doing and would like to know what you can do to move forward your career. Technically this could be about a job promotion, but it also lays the groundwork for a later conversation about compensation.

Be realistic. Understand what are typical raises in your organization. Don’t ask for an exorbitant amount that makes you look like your not tuned in to what is an acceptable increase. That said, it’s perfectly all right to ask for a little more than what you’re hoping for. If they counter, you don’t want to stand too firm. Give them some room to offer less, but still land at a place that you can feel good about.

Don’t ask too often. You’ve gotten a raise. Good for you. Now sit back and be happy with it. Work hard and prove you’re worth the company’s investment. It’s not atypical to get a raise no more than every two years, maybe even longer depending on the company’s performance.

This is especially true if you haven’t been promoted and/or haven’t take on additional responsibilities. One of the rules of negotiating salary is knowing to quit while you’re ahead.

Don’t be afraid to ask.

[bctt tweet=”Women in particular have a reputation for not negotiating salary as confidently as men.”]

One study reported that 57% of men negotiate salary as opposed to 7% of women.

Leaving aside the larger conversation about pay discrepancy and gender, one step to equal pay is that you have to ask for it, to get it. And regardless of whether you’re male of female, if you’re hesitant about asking for an increase, it could mean one of two things, you suspect you haven’t really earned it yet, or you’re just under confident (in which case — get over it!).

Negotiating salary is a skill to be learned.

You might not get all, or any, of the pay raise you want the first time you ask. Or you might find that the conversation was awkward, even cringe-worthy. But it’s a skill you have to acquire, just as much as the ones necessary to perform your job. Because what good is being great at your job, if you’re bad at getting paid for it?