Interviewing I.Q.: Five Signs That You Should Pass On A Candidate

10 Aug Interviewing I.Q.: Five Signs That You Should Pass On A Candidate

It’s always exciting to meet potential hires. It means the company is growing, actively searching for new talent, and people are interested in becoming part of the team. And in most cases, you are going to be spending a lot of time with these people so it’s an important new relationship. But what if you should pass on a candidate?

Certainly some interviews go so poorly that it’s a no-brainer that the person is not going to work out. But sometimes, there are equally compelling parts and things that give you pause. 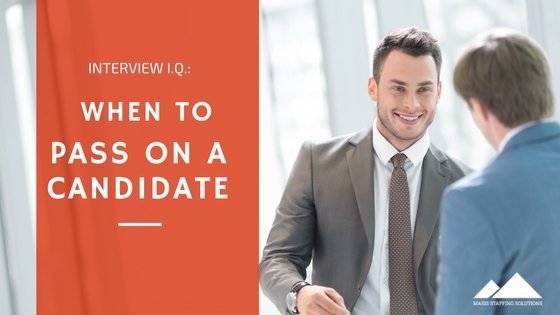 Here are signs that you should pass on a candidate:

They’re late. First of all, assume that everyone shows their best face during an interview. Not unlike a first date, people generally want you to like them, to trust them, to find them interesting and to respect them.

That means that what you see in the interview process should the very best version of that person. After all, once the newness wears off, people relax and their true colors show through.

So, if they are late for an interview, take that seriously. Yes, early morning emergencies happen. Road accidents lead to unexpectedly bad traffic. GPS doesn’t always list every small road, or major construction.

But the truth is, if someone really wants a job, they will know to leave themselves extra time, or to practice the route, or check the traffic report. This doesn’t have to be a deal breaker if your gut is that they are truly a fantastic candidate who made an unfortunate mistake. But. . .well, you’ve been warned.

They’re angry. Ok, it seems obvious, but there’s basically no excuse for an interviewee to ever show anger when discussing their job history or qualifications. If their last employer wasn’t a great fit for them, or they didn’t get along with their boss, there are ways to say that which are still respectful and healthy.

Anyone who is holding grudges, rattling on about their terrible former colleagues or can’t refrain from expletives when explaining why they are unemployed, should be avoided. Unfair things happen.

Being without a job, or in a bad job, can be incredibly traumatic. But working through those frustrations need to happen well before they enter your office. Do you really want this person to have a bad day at the desk next to yours?

[bctt tweet=”If, in the course of the interview, you discover that the person was anything less than transparent and accurate on their resume, move on.” username=””]

You should pass on a candidate who has to explain that they didn’t actually graduate, but attended that school. Ditto for the person who changed the years they worked somewhere to narrow the gap between jobs. Or anything that isn’t actually, you know, the truth. And if they say it was an honest mistake that means they didn’t proofread their resume carefully. Next.

They have no questions. No one should ever have zero questions about a job opportunity. Never. You should pass on a candidate that has so little interest in the job, the company, the hours, the expectations, the mission, the . . . something that piques their curiosity.

This person is dialing it in. They either are unprepared and afraid to ask something that will reveal that, or they aren’t particularly interested and this job is not their first choice. Either way, keep looking.

They’re too confident. It might sound counterintuitive to shy away from someone who seems to have an answer for every question, can easily sum up their strengths and is happy to tell you why they’re the right person for the job. The problem is, you know what you need, they don’t.

And if they are certain of everything, that can be a sign that they are going to have a hard time taking critical feedback, being active listeners and team players. Overconfident employees are prone to not asking enough questions and relying on their own judgment more than they should.

You need people who can name strengths and weaknesses, who are willing to learn from others. You want someone who is motivated and positive, but not arrogant.

You should pass on a candidate who doesn’t feel right.

Don’t be blindsided by a great resume or winning personality alone. You need – and deserve – someone who has the right mix of interpersonal skills and experience.

Don’t make excuses for a candidate who is “mostly” good enough. If you aren’t excited to have that person represent your company on day one, you risk true misery down the road. And if they don’t work out, you’re going to have to do this all over again.