Should I Stay or Should I Go? If You Want to Leave Your Job, Know Why. 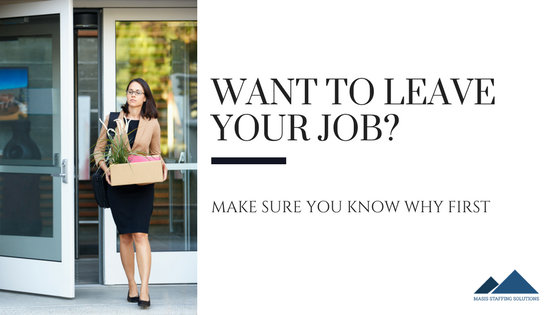 12 Apr Should I Stay or Should I Go? If You Want to Leave Your Job, Know Why.

Posted at 15:47h in Job Seekers by Tanya Ponton

So you’ve decided, as the old song says, “you can take this job and shove it”? Too many hours? Not enough dollars? Awful commute? Bored out of your mind? There are lots of good reasons for why you want to leave your job. But you should know them and understand them. If you don’t. . .maybe wait until you do.

If you want to leave your job, make sure you know why.

When you’re miserable you are just miserable and you want out. You don’t have, like, a good reason, necessarily. There are times when you know . . . you should go. And we have written before that there are some signs that it’s time to quit and if you see them, maybe you should start following the nearest exit sign.

One is a push factor – things in the job that are simply making work unpleasant. That can be a bad commute or terrible work conditions or whatever – but it’s something specific that is making you want to leave your job.

The other is a pull factor – things available elsewhere that are drawing you to a new position.

You can have both push and pull factors – but you need to be able to tell the difference. And understand which ones are most significant.

Why? In the midst of emotion, it is easy to rattle off a list of things that make you unhappy. But it is highly unlikely that they are all equally important to you.

If it’s mostly push factors, decide how many could be solved if you discussed it at work. And of those that could be solved, would that change your mind. For example, if you are a teacher, and the commute is terrible, you are unlikely to be able to work from home two days a week. That’s a push factor from that job, and there’s not much that can be done about it.

On the other hand things like more money or new responsibilities, might be realistic. Maybe you’d like to help train more student teachers or work in an after-school tutoring program that provides additional pay.

Then consider your pull factors – those are things that you don’t have in your current job that you want. But sometimes those are push factors in disguise – most commonly – wanting more money. First of all, how much money – is it 5%, 10%, 15%? The more you want, probably the more difficult. But if it’s less than 10% — and certainly if it’s less than 5% — it’s worth talking about. Also think about the real dollar amount. Asking for a 10% raise on a five figure salary is very possibly not as big an amount to the company, as it feels to you. You might be distorting how big an extra, say $5000 per year to you is. But if you’re a secretary at a law firm, that amount might be a lot less than a senior attorney who wants a 5% raise. So is it really a pull factor?

Know why you want to leave your job — and let your boss know why too.

In general, with pull factors, if your frustration is that what you want is typical for similar positions in your market, there’s at least a decent chance your current employer will be motivated to provide it for you. Because they’ll have to replace you, and compete with those other offers anyway. Plus the time and expense of finding and training someone new. Point out — with humility – that you’re a known quantity and loyal. Also mention – with sincerity – that this isn’t a shake down. Only ask for things that really will move the needle. And if they can’t play ball, then maybe leave the game.